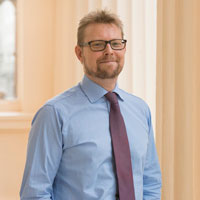 Dr. Jenner is a Consultant in Pain Medicine at Imperial Healthcare NHS Trust. He is also an Honorary Clinical Lecturer at Imperial College, London, SW7.

Dr. Jenner qualified at The London Hospital Medical College in 1995. He trained in Anaesthesia at The London and St Bartholomew’s Hospitals, where he developed a specialist interest in Pain Medicine.

He then underwent higher specialist training in West London, where his posts included being a Specialist Registrar in Pain Medicine and Anaesthesia at St Mary’s, Central Middlesex, Chelsea and Westminster and Charing Cross Hospitals.

Dr. Jenner completed a Fellowship in Pain Medicine at The Royal Marsden Hospital, London.
He is Director of Spinal Healthcare, which aims to provide pain-relief and rehabilitation, allowing restoration to a productive life.

Back to staff members

Get in touch with us